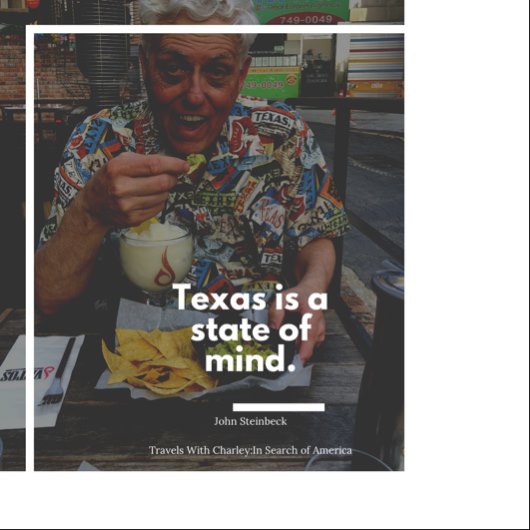 In his book, Travels with Charley: In Search of America, John Steinbeck says, “Texas is a state of mind. Texas is an obsession… A Texan outside of Texas is a foreigner.”

Texas truly is a state of mind. Anywhere in the world, when people ask where we are from, I always say “Texas” and they always know…Ahh, horses, right? And oil wells.

And, everyone of a certain age knows Dallas. “J.R.” they always say. “Sure! J.R.” (I did go to high school with the guy who lived at the real South Fork – my claim to fame).

Though we are having a great time on our FarEast adventure, Mack and I both needed a little taste of Texas last night. So, he donned his TEXAS shirt and we headed out to Itaewon for some tacos and guacamole. We were introduced to Vato’s Tacos the first week we arrived, and have been there three times so far. We always try to get a seat outside on the terrace, so that we can watch the crazy goings-on down on the street.

The Itaewon (which means “large pear tree”) district is probably the most foreigner-friendly part of the city. Before WW II, the area was residential and occupied by Japanese colonists. After the war, the Japanese were forced out and American soldiers moved into the area, due to its proximity to the Yongsan Garrison, headquarters to the U.S. Military. Our church is located in this district as well.

After cooling down on the patio of Vatos and having some guac and yummy fish tacos (try to disregard the photo of that gigantic margarita – it is only a photo prop:), we headed up the hill (which I later found out is nicknamed “Hooker Hill.” Let your mind run rampant and think Amsterdam), to the only Country and Western dance-bar in Seoul. I thought a little Willie Nelson and George Strait, with a two-step would be just the ticket.

We got there at 6:15 and were, of course, the first and only patrons. Apparently, not much gets started in Itaewon during the daylight hours. Behind the bar was the infamous 80-year old proprietress, Mama Kim (she was making what I assume to be red jello shots). I sat adjacent to the wooden dance floor and Mack strolled up to the bar to order. Beer is king here in Korea, so he ordered a Shiner Bock (he told me later that those are made in Austin). Since I’m not a beer aficionado (never had one in my life and don’t plan to start now), he ordered a Merlot for me. That’s a tricky proposition anywhere, but especially in a dive bar in Korea. But, Mama Kim did me a solid and opened a whole new box. The Grand Ole Opry bar is just that kind of a friendly place.

While I was hot and tired and probably would have just sat and enjoyed my merlot and listened to the music (1970s country), Mack was up and at-’em. He stood, chatting it up with Mama Kim, and before long I was hooked on the conversation and joined them at the bar. She is quite a character. She told us her whole life story, complete with family photos and a little wispy tear as she spoke of her late husband – a retired American Army guy. We sat for at least an hour enjoying her story, told in broken English and chuckles, until a group of GI’s came in. At that point, Mack and I decided to head on back down the hill toward home before dark. People always surprise me. Never in a million years would I have dreamed that the sole proprietor of a dive joint in the red light district of Seoul, South Korea would be as tender-hearted and generous as Mama Kim. Childless, she considers the GI’s who frequent her bar to be her “children” and has for the past 40+ years. She put her brother, now a cancer doctor in Houston, through medical school in the US and regularly helps her nieces and nephews. Every night, she talks to the photo of her dear, deceased husband, telling him about her day. Oh, she’s plenty tough, too, as you would expect. She once pulled a fish knife from the hem of her hot pants on some Korean guys who kept coming in to her coffee shop 45 years ago, for harassing her waitresses and regularly failing to pay (she graduated to the hard stuff and opened the Grand Ole Opry about 44 years ago:). You wouldn’t want to mess with her.

Mama Kim loves America and Americans. In a documentary about her life that I found on You Tube when we got home last night, she recognizes the fact that Americans kept them (Koreans) alive after the war, sending food and assistance. She truly loves America and it’s evident by the decor of the bar – American and Texas flags flank the walls. Every Saturday night at midnight, everyone in the bar stands and sings the American National Anthem and Lee Greenwood’s God Bless the U.S.A.

This clip from You Tube is probably the closest I’ll ever get to experiencing that. Mop always said that, “Nothing good happens after midnight.” I’d say that probably goes double for the red light district in Seoul:)

We will, however, go back in the early evening hours to visit with our new friend, Mama Kim.