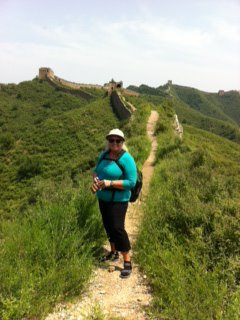 At first blush, the Great Wall of China and the Institution of Marriage don’t seem to have a lot in common. But, I am here to tell you that they are more similar than you might imagine.
I recently completed the single most physically grueling experience of my life – a 7-and-a-half-hour trek across a portion of the Great Wall of China. Built over 2,000 years ago, the wall is in a terrible state of disrepair; piles of rock worn down through the ages.
At one point, early on, our walking group came upon a Chinese military base and we were forced to leave the Wall and continue on a trail through a seemingly never-ending corn field. Our guide, a Chinese man, interestingly named Richard, had warned us to wear long pants, as there would be a “little grass on the path.” The grass was four feet tall and encrusted with 3-inch long thorns. Richard…the master of understatement.
There were long periods of calm, quiet, inspired walking in the shade of the 10-foot-tall corn stalks. Then, of course, there were more challenging legs of the journey, through streams that irrigated the corn, up muddy, slippery rock walls and un-shaded sections exposed to the 100-degree scalding sun.
The scenery was breathtaking (if I’d had any breath to take). Lush, rolling hills flanked the border between Mongolia and China. The Chinese equivalent of a buzzard circled. I had no doubt about what (who) he was waiting for.
Let me digress a moment, lest you think that I am completely crazy. When I booked this mild to moderate activity level tour, I was careful to inquire about my ability to keep up.
“I am an old and chubby lady,” I revealed to the booking agent. “Is this the right tour for me?”
“Of course,” he assured me (most certainly working on commission).
“As long as you are not on crutches or in a wheelchair, you will be fine.”

Perhaps he was referring to the crutches and wheelchair that I would require after the tour.
I suspected that something was amiss when I was introduced to my tour-mates at breakfast that first morning. The group consisted of five 20-something, buff guys from the UK and Croatia, and a couple my age from Canada. The older couple made me feel better for a few minutes, until I discovered that they were both marathoners who enjoyed participating in extreme sports. I, on the other hand, like reading, sewing, and watching reruns of Murder She Wrote.

But…there I was. A member of the group.
At one point, several hours into the trek, Richard stopped and scratched his head, saying, “I don’t remember this part!”

Referring to the map, he then declared with conviction, “We need to climb the wall.”
Ahhhh. No. It was a 25-foot climb. Straight up. With footholds consisting of only an occasional missing brick in a crumbling wall constructed centuries before. While all of the boys took the challenge, those of us with more sense – and more brittle bones – opted to brave the trail, hoping against hope that we would eventually get there – wherever there was!
Well, to make a 7-and-a-half-hour long story short…I lived to tell the tale.
Just barely!

I laughed, I cried

I marveled at God’s handiwork   and

The handiwork of man.
I almost gave up .

Recommitted
And, I made it!
I wouldn’t have missed it for the world!
I spent our 37th wedding anniversary alone, at the base of the Great Wall of China, readying to board an overnight train to the Shaolin Temple. On that same trip, I rode a bike for miles through rice paddies at the border of Vietnam, rafted the rapids of the Li River on a bamboo boat and explored the mystery of the Terra Cotta Warriors. Not to mention cycling through Beijing traffic (envision a bicycle ride on I-45 at rush hour). One crazy adventure after another.
When Mack and I married at the tender age of 20, we had no idea about the adventures that we would encounter. Clueless about the responsibilities of marriage and parenthood, we were crazy about each other…but that’s hardly a foundation for the challenges that a life together presents.
Much like a trek on a rugged 2,000 year old trail, any long-term marriage has its challenges. To be sure, there’s been “a little grass on the path.”
Sleepless nights with three colicky babies turned adventurous teenagers, learning to live in harmony as two strong-willed individuals, and the ups and downs of our careers presented some pretty rocky terrain. Lingering illnesses and subsequent deaths of loved ones provided challenging walls to climb.
Those tough times were coupled with long, happy periods, when we walked tranquilly through days and weeks together, confident that somehow, in our youthful ignorance, God had made the right choice by bringing us together all those years ago.
Well, to make a 37 year long story short, we lived to tell the tale!
Just barely!

We laughed, we cried

We marveled at God’s handiwork  and

the handiwork of man.
We almost gave up.
Prayed (a lot!).
Recommitted
And, we made it!
I wouldn’t have missed it for the world.

“But at the beginning of creation God ‘made them male and female.’  ‘For this reason a man will leave his father and mother and be united to his wife,  and the two will become one flesh.’ So they are no longer two, but one.  Therefore what God has joined together, let man not separate.”
Mark 10:6-9