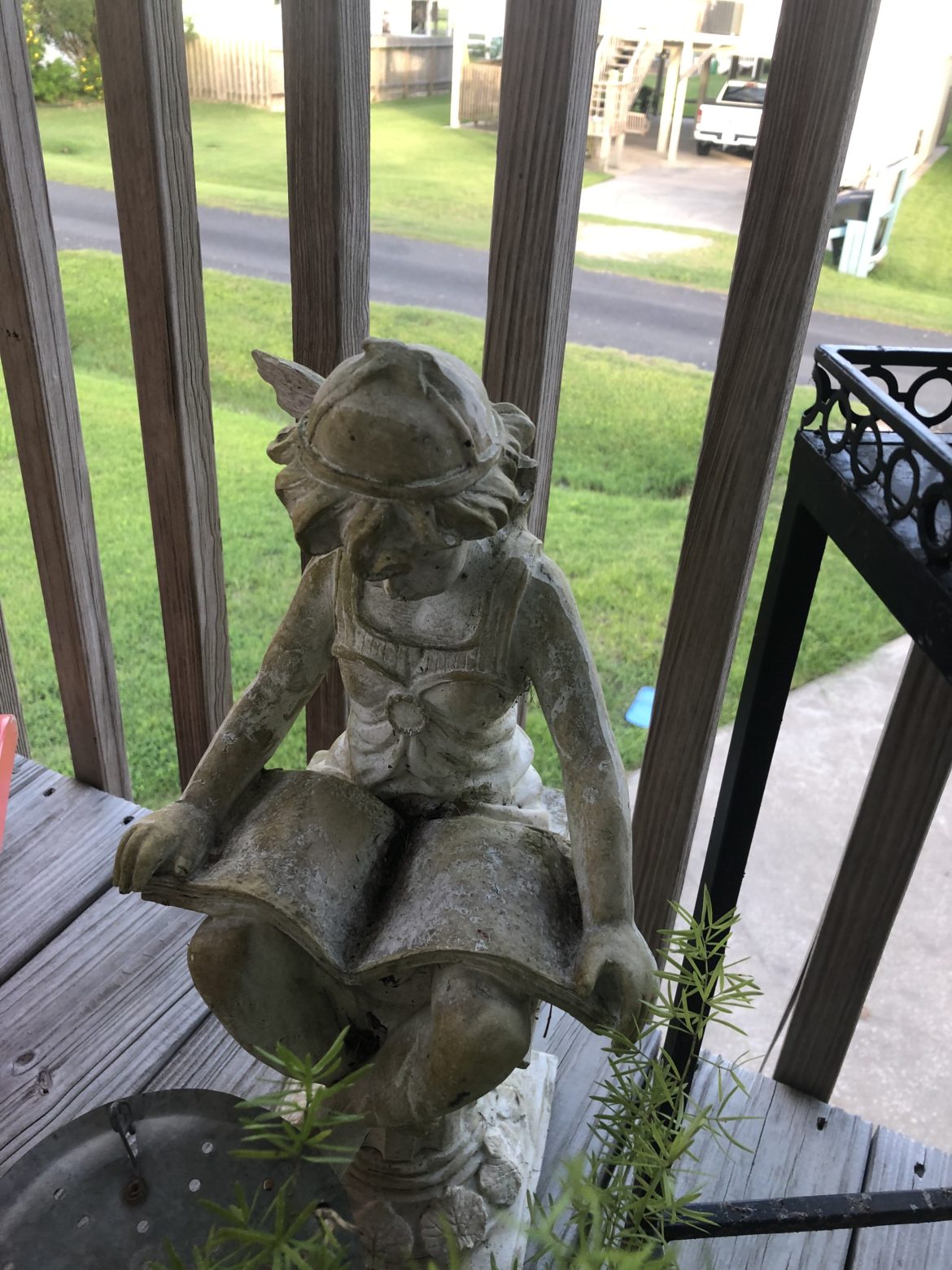 I went to Beaumont yesterday to get some fabric for a project that I’m doing for the boys (reading pillows and coordinating throws…more on that another day). While I was driving, my sister called. She has just moved from Beaumont to the Dallas area and her house in Beaumont has not sold yet.

She suggested that I go by her (lush) back yard and get some of the potted plants that had not fit in the moving van. She plans to come back at some point, but felt bad for “abandoning” the plants (which, by the way, were doing just fine. Beaumont is at about 100% humidity all of the time and it’s rained a lot this summer as well). So, I did. Filled up the bed of the truck with all sorts of goodies.

But, the best goodie of all was the Reading Fairy statue. Tammy had bought the statue for MOP several years ago and I well remember it in Mop’s cute, whimsical backyard. She only has one wing, as she sits bent over a book, enthralled with the story.

I told Tammy last night that I had thought about trying to fashion a replacement wing from plaster, but then decided that I like our reading fairy just the way she is…a little wounded…like the rest of us.

Tammy wrote back and said, “She doesn’t need to fly as long as she can read. She can go anywhere through the pages of the book.” Well there you have it…both of us reading NERDS and proud of it:)

Sitting on the deck last evening, as the sun went down over the Intracoastal Canal, admiring my rocker and my reading fairy, I got to thinking about my time as a Reading Specialist in Los Angeles, over 20 years ago now (how can that be?). Our little damaged fairy reminded me of my first class of 5th graders there in LA. An inner city school, 100% free/reduced lunches, 5 of my 27 students had lost a parent THAT YEAR to violence and NONE of them could read above a first grade level. They were smart kids, but they just hadn’t been taught.
I was assigned to the school in early April and the kids hadn’t had a teacher all year long (the spring semester lasts until July there). Several long-term subs had fled, running and screaming from Room 13, and those kids thought that they could run me off too. They tried. But, I wasn’t going anywhere (well, maybe I would have, but I had made such a big deal of going back to the classroom to Mack that I wouldn’t have called “uncle” for a million bucks).

Every afternoon for the first several weeks, I cried when I put those kids on the bus for home. I knew what they were going home to. I wanted to adopt every last one of them. But, finally, one sleepless night a few weeks in, I received a message. The Good Lord told me that the only power I had to help those kids was to teach them to read.

I couldn’t change their home lives, I couldn’t keep them from being neglected or mistreated, but by golly, I could teach them to read! So, I did. The highlight of my career and a major highlight of my life.
So, while my kids might have had a little damage, much like our little one-winged reading fairy, once they could read, they could fly. I can’t think of a way I would rather have spent my career.