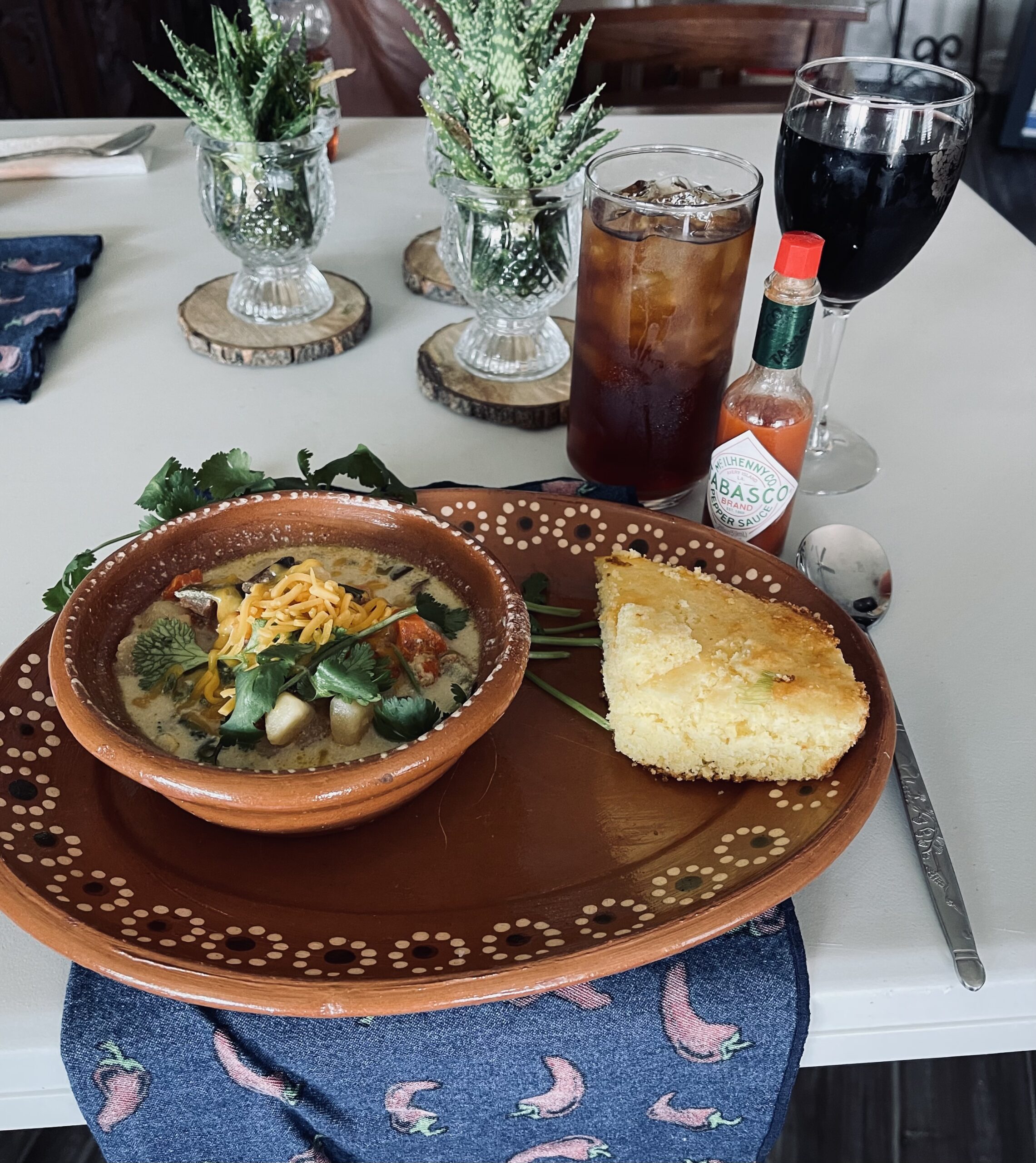 Well, I don’t know about you, but I have gone most of my 66 years without ever purchasing a leek. A leek? What the heck….

But, my BFF Linda loves shrimp bisque and the good-looking recipe that I found (then tweaked) called for a layer of leeks…so, away I went to the store (all the way to Beaumont, as our little BIG STORE doesn’t carry leeks). Mack and I had planned a fun pre-holiday dinner with our dear pals a couple of days before things got wild with kids coming in (on both sides) for the Christmas holidays. And, I wanted to surprise her with her favorite soup.

All of that to explain why-in-the-world I have leftover leeks. There you go.

One of my New Year’s Resolutions is to be a better steward of the abundance that we’ve been given. I am ashamed to say that I have not always been a “leftovers gal.” Actually, just the opposite. But, I’ve been convicted this year to do a better job of using what I have (clothes, shoes, books, fabric, craft supplies…and food). So, I am starting today with the over-abundance of grocery and produce items that we purchased for our fun Christmas week with Trae & Mel and their sweet wives. (I may have overdone it a bit – see photos).

To further complicate things (why live in a state of ease and contentment when you can be on the edge of insanity?), it looks like the contract will go through on the sale of our house and we will need to be moved out in 25 days. Not to worry – I’ve done it much more quickly in years past. Since we don’t yet have a new house, I feel an even greater urgency to get all of our food used up. Books and craft supplies store well – not so much with canned goods and pantry staples:) So, until we get down to the canned green beans, I guess the diet resolution will have to wait.

My grandmother, who reared her kids during the Great Depression, was the queen of “using it up.” I’ve mentioned here before that she would babysit my sisters and me when our parents traveled back in the day, and on that final day of her stay, she would make soup with all of the leftovers. Be careful what you leave on your plate, we joked. It will end up in the soup. But, it was always yummy. And, as an aside, Ma lived on up into her 90s and lived well on the savings from her blue-collar husband’s (my Pa) salary. She was frugal, but lived very well and never wanted for anything. (As another quick aside – for the last couple of decades of her life, she gave us all – 9 grandkids and spouses and 22 great-grands – underwear for Christmas. We made a joke of it the first couple of years, then came to depend on her yearly gift for our unds).

Getting back to the leeks…So, thought I…what shall I do with all of these leftover leeks? I also had a lot of leftover ham from Christmas day (chopped and frozen after the big day – well, after the quiche which is traditionally made on the morning after Christmas). Checking in the produce drawer, I found three kinda limp carrots and a few stalks of really limp celery. In my past life, I would have just chunked them into the trash, but instead, I went to my trusty google-ator and found that limp celery and carrots are perfect for soup. Makes sense. I also had a few potatoes, some chicken stock and a cup or so of heavy cream (there goes the diet).

Anyhow, it finally got cold here and soup seems like just what the doctor ordered. So, I found a few good-looking recipes for Ham and Leek Soup on the inter webs (who even knew that was a thing?) and tweaked them to work with the ingredients that I have on hand.

Not to brag or anything…but YUMMY! Here’s the recipe. You might want to “Pull a Ma” (which is what I call it when I make soup) and clear out your Christmas fridge.

While sautéing vegetables, bring chicken stock and water to a boil and add diced potatoes. Cook for 7-8 minutes.

*We topped it with a little grated cheddar cheese and a little cilantro, then finished it off with a side of some leftover buttermilk cornbread.

Yummy on this chilly day.