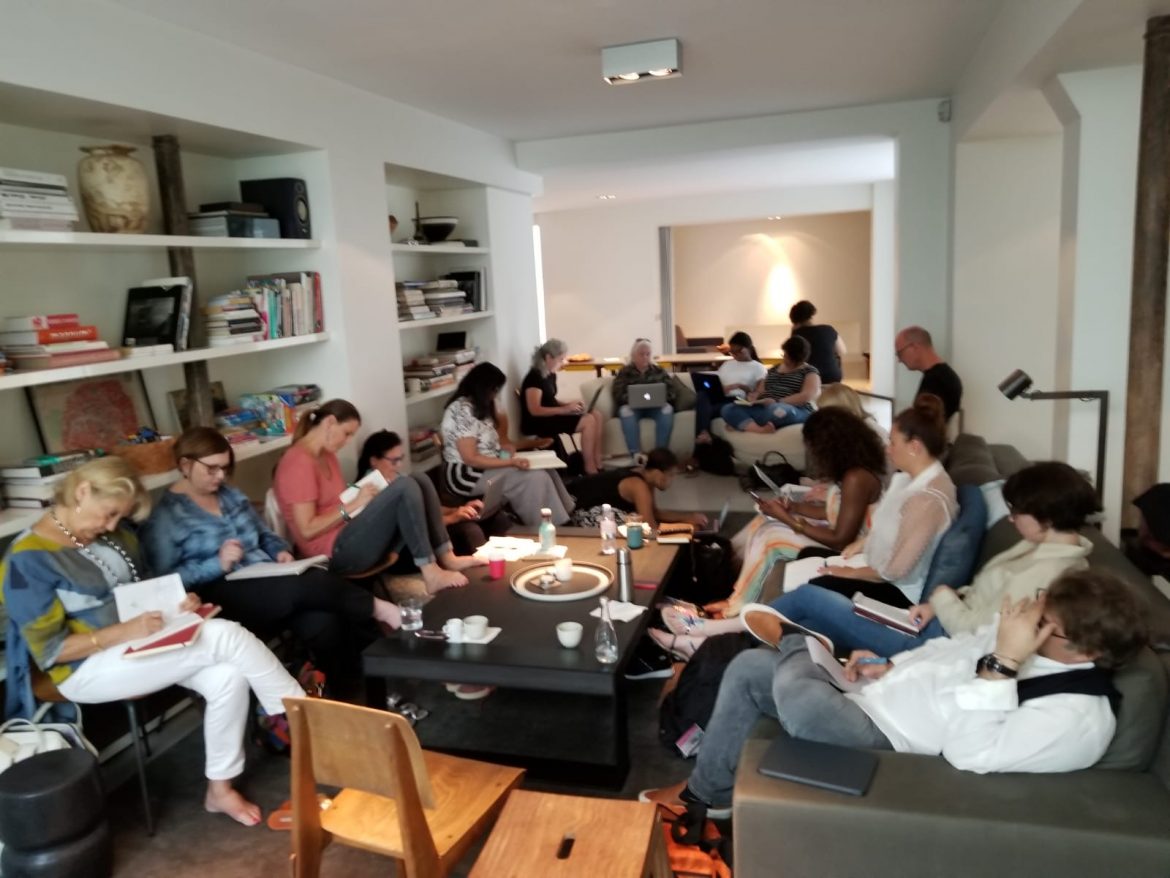 I took a bit of a break from BLOGGING this past fall and winter, but I had a really good excuse! I got a partial scholarship to attend a Writer’s Retreat in Paris, France back in September. I had been away most of the summer and had every intention of hanging out in Seoul for all of the early fall, but seriously….who could give up the chance to spend a week with great writers in Paris, France?

So, even though I would miss Mack’s 65th Birthday, he was on-board. I had been talking about “Mop’s book” for over a year (since she passed) but I just couldn’t quite get going on it. My excuses were many…mostly that I was finishing up the writing of a silly culinary mystery. Then…I would start on what I consider the most important thing that I will ever write.

On September 1, after only being back home for a week, I hopped on a plane and headed the 9 hours from Seoul to Paris (somehow, I was shocked that it took so long-my geography could use a little help). Just to make things easy, I had reserved a room in the flat that we would be using for the retreat. There were two other bedrooms there; most of the other
20-ish participants were staying elsewhere. I loved the convenience of being right there. I could (and did) walk to the Seine every morning for a cafe au lait and croissant. According to everyone I met, September is the primo month to visit Paris. Who knew? It was spectacular.

To say that week was life-changing sounds trite and overused. But, it’s true. That week changed my outlook on my work as a writer and my approach to the book. Of course, I was scared to death. The leader of the retreat was a tough taskmaster. We were all required to read our work aloud each day, and her reviews were never candy-coated. On the other side of that coin were the remarkable other writers, who were nothing but supportive. With every reading, I became more and more convinced that my story was one that needed to be told. I am forever indebted to that supportive group for ushering me into this work.

I got back home to Seoul the next week and set forth to write the story. Every morning, I woke up when Mack did (4:45 am) and went directly to my writing desk. I took breaks to walk and do some small projects during the day, but pretty much kept my nose to the grindstone for the autumn months. My goal was to have a first draft ready for a
week-long intensive workshop to be held immediately following the San Miguel Writer’s Conference in February. The Conference was fun and inspirational, and I always learn so much from the week of classes and interaction with other writers. It was extra fun this year because Mack joined me for a couple of weeks and Trae and Corie came for a long weekend. Additionally, my pal Karen came down for the conference and we had lots of fun with our San Miguel friends, Doug and Betty.

Then, they all left…and the work began.

I met with the Intensive Workshop group for the first time on the Saturday following the Writer’s Conference. There were eight of us. And the teacher. Dr. Susan Brown, a take-no-prisoners kind of gal, who had not received the memo about maintaining our delicate, fragile psyches. As an Early Childhood teacher, my outlook on feedback is a bit different from the two intense teachers whom I encountered this past year. But, I must admit, trembling in my shoes each morning as I entered the workshops, I learned a great deal.

After San Miguel, I went to Midlothian to spend a few days with the grands; unknowingly, the last that I would spend with them for a long time. I came down to the beach house to get ready for a community theater performance, and got caught right smack in the big middle of the COVID19 quarantine. I haven’t been out of the house now in 60 days.
On a bright note (the only one, I might add), I did finish the manuscript of my memoir, A Real Good Girl, and am actively seeking representation for the work now.

Though I didn’t post any entries on the BLOG during my memoir-writing months, I did keep on writing. And taking photos. So, now that the book is winding its way out into the world, I am recovering some of those previous entries and beginning to write some more.

The book is a love letter to my mother, really. We always had a little bit of a tricky relationship, and it wasn’t until I started writing our story that I began to understand how and why that relationship was strained. Writing the book was a major cathartic event. Even if I never publish it, the writing itself was worth every minute spent, every tear shed, every memory mined and brought to the fore. I highly recommend the process.