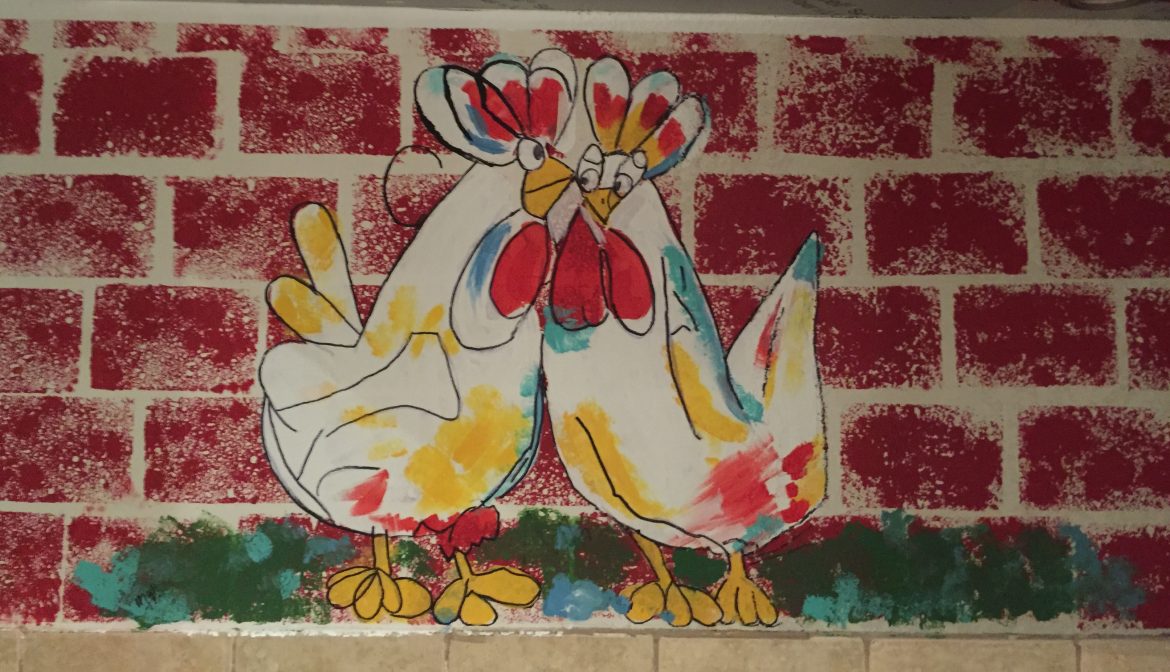 My red Bertazzoni Range is the biggest splurge I’ve ever made. I’m aware that a much less expensive stove would serve just fine for the less-than-gourmet offerings that I prepare for poor Mack on a regular basis. (Every once in a while, I’ll bust out a fabulous multi-course meal – but mostly it’s chili or baked chicken or maybe the occasional grilled salmon). But, I caught a glance of that magnificent range across a showroom floor and nothing but do but….well, you know the rest.

About a year and a half ago, we bought a “grandma” house down the street from our four precious grand babies. It was not the house of my dreams. My whole life, I have hated cookie-cutter neighborhoods – and that’s exactly what this is. Oh, we looked at a myriad of wacky homes before we settled on this “regular” house. My poor realtor took us to a log house, a 1940s (unrestored) school house, a semi-restored house built in 1906 and several more modern homes on some acreage.

None of those wacky places really worked out. We travel a lot with Mack’s work and we still have the beach house, so a “project” home really wouldn’t have been a smart move. To be honest, I would have easily gone for one of the projects, but Mack just wasn’t up for it again.

So, on the day after we pulled the plug on the negotiations for the 1906 remodel house, Jack told me that there was a house for sale down the street from them. I don’t think he was necessarily advocating for a down-the-street abode, but I went ahead and drove by the house I thought he was talking about (turns out it was the wrong one).

But, it spoke to me:) I don’t know why, but when I pulled up in front of the house (5 doors down from our babies), I thought…I can do that! Granted, it was kind of a cookie cutter house – a big nice one, but I’m pretty sure there are others in this neighborhood that are exactly the same. But, I loved the red brick, the corner lot, and especially the location. Our babies could (and do) walk down for a visit. So, we went for it. Mack and our realtor kept saying, “Really? Are you sure. This is EXACTLY what you said you DIDN’T want.” Well, a girl can change her mind.

What I’ve always loved about old houses is the freedom to paint a wall a wacky color or use a room in an unconventional manor, add a built-in of some kind or another. So, with Mack’s incredulous buy-in on my embracing this “cookie-cutter” house, we set out to make this our own. And, frankly, I think we’ve done a pretty good job.

It’s a pretty house. On a beautiful corner lot, with great landscaping (we will kill it all eventually, I’m sure…but so far – most of it is hanging on). The previous owners had 4 kids and grandparents who lived in, so they used each of the 6 bedrooms in a traditional way. Obviously, Mack and I don’t have a need for 6 bedrooms! Fortunately, the house was situated in such a way that we could reconfigure fairly easily.

We started with repainting almost every room. The previous owners had used some pretty funky colors, which worked well for their young children, but didn’t really cut it for the vibe we were going for. We added a room full of shelving in the front of the house to make a little “library,” added a book nook and reading area in the upstairs kids’ area, added a barn door in the bedroom-turned-dining room, and took out a wall of cabinets in the kitchen. We relocated the cabinets into one of the back bedrooms which now serves as my very favorite room – my craft/sewing room. Anyhow, that’s where the Bertazzoni comes in!

We had to reconfigure the kitchen to accommodate the Bertazzoni. As an engineer who has headed up some pretty important historical restorations (Like the Texas Capitol building), Mack gave me some good advice. “If you can’t match it exactly, do something VERY different.” So, I took that to heart and painted the new cabinets turquoise, put in a butcher block countertop, LED lights in the cabinets (we change the color according to the season: orange for Halloween, green for Christmas, red for Valentine’s day, etc.)

So, all of that got done in record time. Great craftsmen helped us out and I was really happy with all of it.

BUT…I couldn’t decide what to do for a backsplash over the stove. I really want to replace ALL of the tile in the kitchen (it’s a generic brown that was used in the 1 jillion houses here in this neighborhood). But, that just wasn’t very practical. So, I have gone back and forth on what to do above the stove. Frankly, it’s been blank and ugly for a year and a half. I hung “under construction” signs in the area when we were having parties-lest anybody think that I didn’t realize that it was blank and ugly.

At first, I wanted to make painted tiles in my ceramics class. I worked and worked on a design for that, but it just never came together. Twice, I had tile samples that I brought home (both completely different from each other) and finally decided that I really didn’t like either of them.

So, I was going to have special company last week, and really wanted to have something up there. So, I figured that I would paint something. If worse came to worse, and I hated it, I could always just paint over it. So, I dug around the internet to find something simple enough for me to paint, and something that would work with our style.

Now, this story is getting a little long, but I’ll just digress a minute to let you know that I didn’t buy much new for this house. Over the years, we’ve had a few “second homes.” Like, the townhouse in Houston when we were evacuated due to Hurricane Ike. Or the house that we had for 5 years in Montana, while we were doing some projects up there. We also had a couple of apartments in Fort Worth before we bought this house. So, I had lots of “stuff” in 7 different storage buildings over the course of 19 years. So, my goal was to empty the storage buildings (never to have a storage building again), and to purchase as little as possible for this house.

I really didn’t have a style in mind. What I did want was a place where our 4 grand babies (ages 5 and under at the time) could come in and play and I would never have to say “no.”

Over the years, I have amassed a great deal of…well let’s just say “diverse” gradoooo. Things like a kneeling bench, an oriental chest, an antique umbrella holder, and on and on and on. I also went through a phase of searching for numbered prints at resale shops, and I have a number of those.

All that to say, what I came up with (out of 7 storage buildings accumulated over the course of 19 years) was a real folk-art vibe. I didn’t set out to do that, but that’s how it turned out. And I like it…I really like it.

To underscore the “kid-friendly” aspect of the house, I have used bright colors whenever possible. So, all of that to explain how/why/what in the world I was thinking when I painted these chickens over the mega-dollar range:)

BTW…While I didn’t do it on purpose, perhaps there was a subconscious decision to choose a picture of a chicken kissing his partner. Mack and I have made a point of making a Selfie-smooch-photo in front of as many world monuments as possible. My favorite is at the Eiffel Tower. My important company all loved the mural. The final cost was $0.89. I had to purchase a bottle of red brick-colored paint. That’s it! (as opposed to $1000+ estimate for the tile that I really didn’t love anyhow). When I sent a picture of it to our eldest son, his response was…”A chicken.” Not sure what that means.