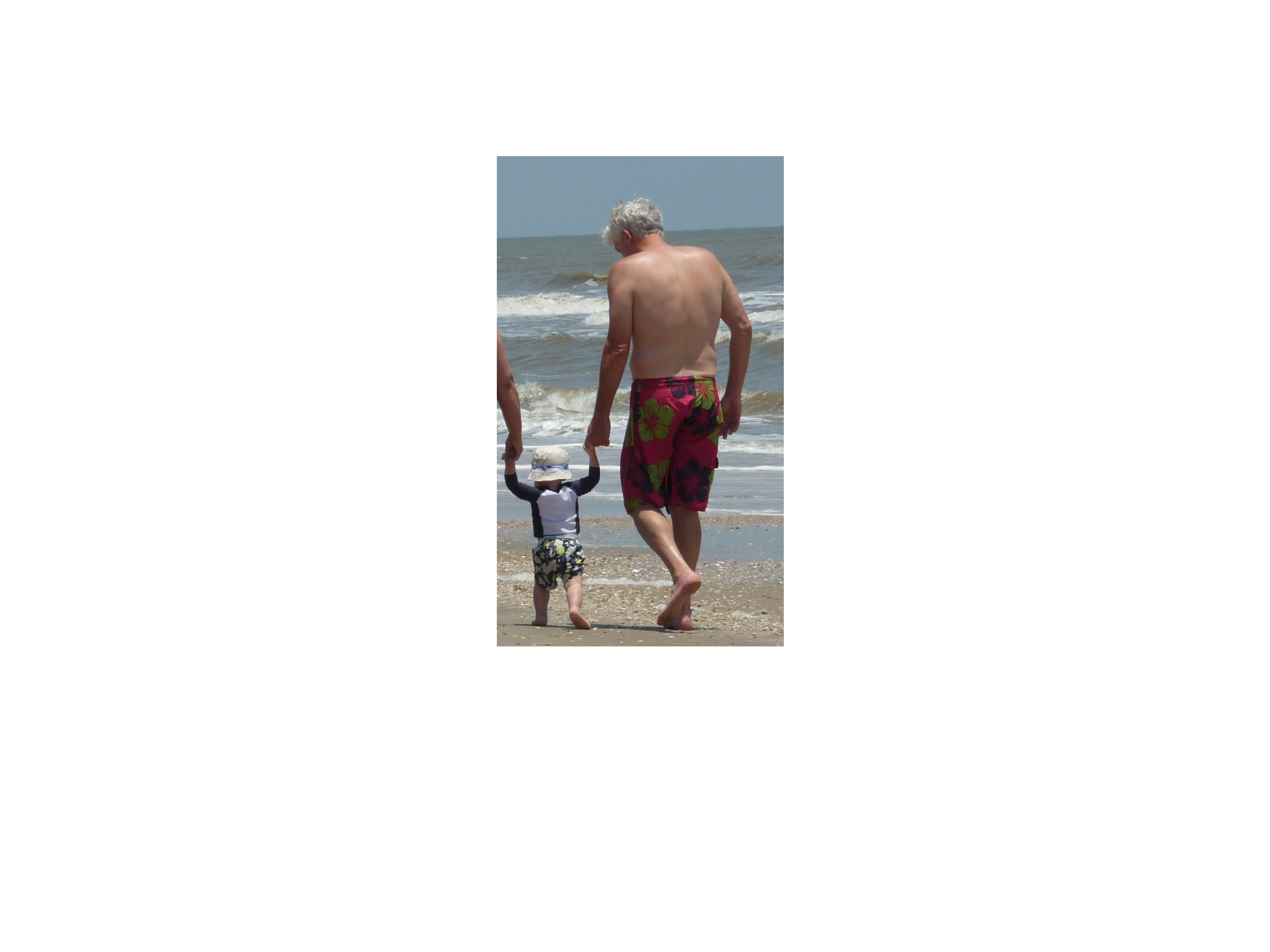 In what I consider the ultimate act of passive aggression, my daughter-in-law recently sent a photograph of Mack, our one-year old grandson Coby, and me….on the beach….in a bathing suit…from the rear. It is not a pretty picture.

Looking at that photograph, I was reminded of the fact that I never wanted to be a grandmother. For years, my students (I was a professor of early childhood education) would say to me, “Oh, you will be such a great grandmother.” Yuck! I guess they thought that my treasure trove of lullabies, nursery rhymes, finger plays, and crazy costumes was just the thing for a grandmother. I always smiled, not wanting them to know my true feelings. After all, I did have a reputation to think of! What kind of person does not want grandchildren? But, I really didn’t. I couldn’t stand the idea of watching (with my mouth firmly closed) as my kids did it all wrong! And besides, that was for old folks!

So, last year, when our youngest son (who is not so young, at the age of 30) announced that he and his wife would be having a baby, I was met with mixed emotions, to say the least. Everyone says that being a grandparent is even better than being a parent. Since being a mother is the number one BEST thing that ever happened to me, I could hardly imagine that grand-parenting would trump that.

But, I did start to get a little excited. After all, I AM old…I guess it’s time. But, I was also scared. Knowing what I know now about the world and its darkness, how could I ever relax? How could I stand it if our baby was hurt or sad…what if other kids bullied him? Another emotion, frankly, was a little bit of jealousy. Ahhhh, how I would love to be young again and starting over with my own babies. I would give anything for one more of those endless nights when none of them would go to sleep! I would hold them and rock them and never let them go.

My son joked with me about which set of grandparents would spoil the baby most. Little Coby would be the first grandchild on both sides; the anticipated little prince of two sets of grandparents who have just enough disposable income to be dangerous!

I will admit to having bought in to the “buy the kid a pony” mindset for a while. But fortunately, the 9-month gestation period gave me time to rethink much of my predisposition about grand-parenting, and to realize that what the little chap would need was not a pony or a jet ski (though both were on the table for a short time), but a wise and content grandparent with time to listen and love him with all of my heart. I was beginning to come around.

Smart grandmas know that hours logged with our grandchildren are what make a difference. Time spent with “Nana” is a better inheritance than a big old trust fund. Here it is…another chance to teach a boy to sit in old lawn chair down at Rollover Pass and wait for the tug on his fishing line. Another chance to introduce a boy to Thurber and C.S. Lewis and Madeline L’Engle. Another chance to take a boy to Bible School in the summertime and show him how to chase fireflies and churn ice cream on the porch like we did when we were kids.

Well, as you have already guessed, the baby was born…and so was the grandmother!

On the day that infamous picture-from-behind was taken, I experienced one of the most joyful days of my life. We introduced our 13 month-old grandson to the ocean for the first time. His mom had slathered him with sunscreen, dressed him in a sun-resistant, long sleeved surfer shirt (size 1 – does it get any cuter than that?) and put a floppy fisherman’s hat on that sweet little red head of his. He delighted in the texture of the sand and ran toward the shallow waves at the shoreline.

Since Mack and I are both lovers of salt water and sand, we were particularly thrilled with this turn of events. Just as we had dreamed we would do, we slowed down to the baby’s pace, stopping every time he stopped, marveling at the miracle of a seashell through the eyes of a little guy seeing it for the first time.

As he toddled along the shore, with his newly found walking skill, he would reach up to steady himself with either my hand or Mack’s. Of course, we were both at the ready every time. When he started to stumble, or when he became tired, he didn’t have to beg; or whine, or even wait a second to be shored up. He simply reached out his little hand, and there we were to help him. A glimpse into the heart of God, to be sure.

We got word last week that baby Coby will soon be a big brother…not to one, but to TWO new babies to be born this summer. This time, I had no hesitation. I am thrilled…But, Mack? Well, Papa is a little frightened! I immediately asked for his credit card and commenced the shopping. Surely this time, I’ll get those girls that I’ve waited so long to dress up! Mack will never be able to retire.

Life is funny, the way things unfold. Even three or four years ago, I could not imagine myself happy to be a grandmother. Those old fears faded away the minute I held that little guy for the first time, and now I’m pretty good with the idea of being a grandmother. Actually, I believe that it is the role I was born to play.

ps…I cut myself out of that bathing suit-from-the-back photo. I haven’t come that far!