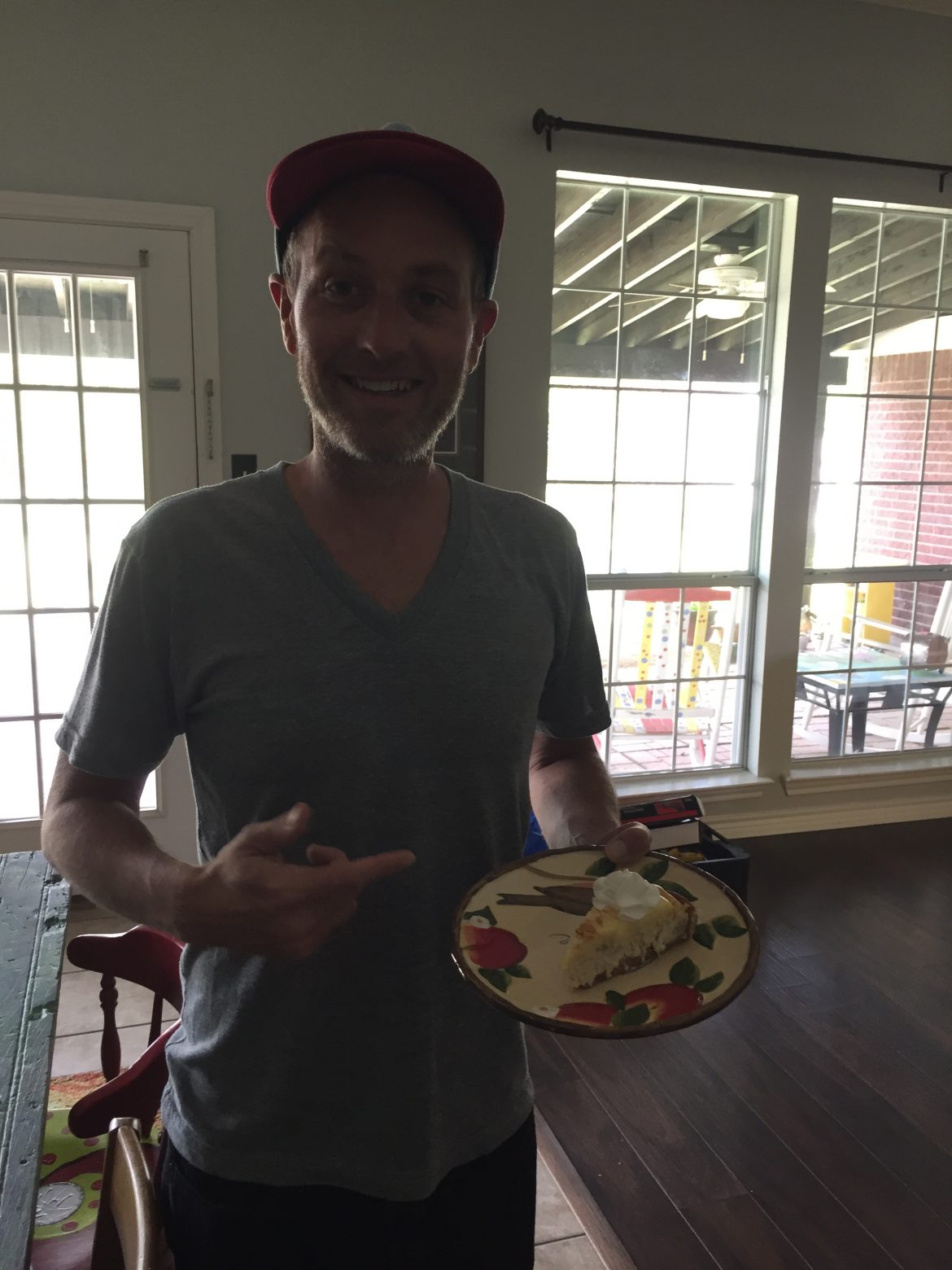 There’s really nothing better than a good, homemade pie. When I think of pie, I think of my favorite actor, Andy Griffith, in that sweet little movie, Waitress. “Forget about everything else I ordered and just bring me that damn pie!”

Oh, he goes on to extol the virtues of the flavors and textures of the Chocolate Strawberry pie, making me smile every time I think of it. Haven’t you always wanted to forget about everything else and just eat the damn pie? We have a regular rotation that I have at the ready when he comes to visit. Hershey icebox pie, chess pie, chocolate/coconut meringue….He loves them all. Eating out in his new hometown of Austin, Texas, he has fallen in love with the Banana Pudding Cheesecake at Hoover’s.

Now, let me back up a bit to let you know that Mel is the most fit in our entire family. He swims 2 miles every morning before work, and really only eats one meal a day (not, healthy…I know…but, he is in great shape – thin, with a swimmer’s build). But, he can put away some pie!

For his latest visit, I wanted to mix it up a bit, so I searched and searched for a banana pudding cheesecake recipe on the internet. I never found exactly what I was looking for, but did a little “doctoring” on a Southern Living recipe. The results were amazing! Not only was it delicious, it was absolutely beautiful.

Mack and Mel both enjoyed several slices during the weekend visit. (Full disclosure…I am currently on my 62nd annual diet and did not have a piece. That’s not to say that I didn’t eat the point off of each serving that Mack took. I always say that I’m making sure he doesn’t poke his eye out with the pointy part!) We sent the rest home with Jack on Sunday night after Mel left, so that we wouldn’t be tempted to finish it off. I got the greatest compliment ever the next day. Our daughter-in-law, Stephanie remarked, upon her first bite…”I LOVE YOUR PARENTS!” Now, there’s an endorsement!

Recipe: Modified from Southern Living Magazine and what we could taste in the delectable pie from Hoovers in Austin, Texas.

PROCEDURE:
*Preheat oven to 350°.
*Stir together vanilla wafers, pecans, and melted butter in a small bowl until well blended.
*Press mixture onto bottom of a greased and floured 9-inch springform pan.
*Stand 17 vanilla wafers around edge of pan (rounded sides against pan), pressing gently into crust to secure. *Bake 10 minutes. Cool completely on a wire rack (about 30 minutes).
*Combine bananas and lemon juice in a small saucepan. *Stir in brown sugar.
* Cook over medium-high heat, stirring constantly, 1 minute or just until sugar has dissolved.
*Beat cream cheese at medium speed with an electric mixer 3 minutes or until smooth.
*Gradually add granulated sugar, beating until blended. *Add eggs, 1 at a time, beating just until yellow disappears after each addition.
*Beat in vanilla.
*Gently stir banana mixture into cream cheese mixture. *Pour batter into prepared crust.
*Bake at 350° for 45 to 55 minutes or until center is almost set.
*Remove cheesecake from oven
*Gently run a knife around edge of cheesecake to loosen. *Sprinkle top of cheesecake with coarsely crushed wafers.
*Cool completely on a wire rack (about 1 hour).
*Cover and chill over night.